The most valuable resource you have is time.

And yet, it is the one non-renewable resource that people waste senselessly.

In the spirit of talking about efficiency with somebody the other day, I realized there are several things America as a nation does quite inefficiently.

I wanted to point out a few of these in order to show you what I mean.

Keep an open mind, sometimes better to go against the grain in the name of efficiency.

The military uses all 24 hours in order to tell time.

This 24-hour clock is much more efficient than the 12-hour clock we grew up learning about.

It appears the 12-hour clock stems from Egyptians and Romans utilizing 12-hour sundials and water clocks to tell time…guess what, we don’t use sundials anymore, and I’m pretty sure I’ve never owned a water clock! (Source)

I don’t know why the 12-hour clock still exists, but it frustrates me to no end having to halt a conversation to explain that I meant 6 PM, rather than 6 AM (or vice versa).

Most of the time it should be fairly self-explanatory whether I mean morning or evening, and yet I constantly find myself having to clarify.

If we used the 24-hour clock this pointless conversation wouldn’t take place.

We should advocate using the 24-hour clock for everything in life. If children were brought up using it, telling time would be much simpler!

*side note* I understand this would render some analog watches/clocks useless, but it is 2019, who cares.

Do you know what Inches, Feet, and Yards all have in common?

The rest of the world doesn’t give a shit about them!

Interactions with foreign nations are complicated by having to calculate the equivalence of yards to meters, or centimeters to inches.

Again, why do we use feet?

To further confound this confusing point, swimming pools are just as frequently measured in meters, as they are yards.

The U.S. appears to have been inching closer (see what I did there) to using the metric system.

The Phonetic Alphabet is a simple, efficient, and standardized way to identify letters precisely. It is used by professional communicators, especially the police, military, and/or emergency personnel. (Source)

This is the Phonetic Alphabet:

Obviously “C” is a joke, but I have heard the rest of these used in conversation.

My last name is Pere. This is not a name I can say out loud and people immediately know how to spell.

Since “P” sounds like “T” “B” “D” etc. I am constantly having to spell my name phonetically.

It is extremely annoying (and very unprofessional) when the receiving person doesn’t understand the phonetic alphabet. Below is how this conversation often goes, seriously.

Me: “It is spelled Papa Echo Romeo Echo.”

This isn’t just America, I’m sure the whole world does this inefficiently.

I’m sorry, but if you work as a telemarketer and can’t comprehend the phonetic alphabet, you need to re-evaluate your career decisions.

If you don’t understand the phonetic alphabet, go memorize it right now! 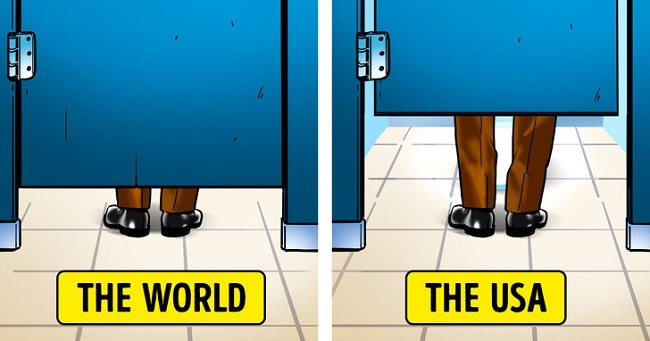 Daylight savings time was created to move an hour of daylight from the morning to the evening.

I lived in Hawaii, where they don’t observe daylight savings time, for the last three years. I did not miss having to adjust my clock, and sleep cycle, twice a year.

An interesting article the New York Times wrote describes how daylight savings time (more daylight in the evening) encourages Americans to leave home more. This translates to more shopping, eating, and especially…driving. The Association for Convenience and Fuel Retailing, a lobbying group for convenience stores, has pushed to start daylight savings time earlier in the year. (Source)

I would be happy to lose daylight savings time for the convenience of it. If it means I would inadvertently save money too, that is a win/win!

America is one of the only countries that display the price of an item, without including the tax.

In America, you will almost, always pay more at the register, because taxes were not included in the price tag.

This is inconvenient, but not the end of the world.

I definitely wouldn’t complain about taxes being included in price tags though, almost seems like that should fall under the “truth in advertising” legislation.

What is the Point of this Article?

It’s my blog, and I get to write about whatever I want to!

So, this was an article about things America does inefficiently.

Hahaha, I simply wanted to voice some ideas I have about streamlining the American way of life.

Take it or leave it, but some of these things would make our life a lot simpler, even if it would take a little while to get used to them.

In the same way that I thought outside the box on some of these topics, you need to constantly be looking for little things to save time and make your life more efficient.

Every little bit counts in the world of time management.

Creating systems is another great way to streamline your time. If you find yourself doing a similar task regularly, try to figure out how you can automate some, or all, of it!