Tenant proofing your bathroom | SAVE YOURSELF from pain!

As a lot of you already know or have heard, some tenants are very hard on rental properties. Over the years I have had to replace miles of carpet, dozens of doors, and even had a smashed toilet or two. For me, one of the biggest challenges is keeping the bathroom as carefree as possible. We all know what goes on in bathrooms and what kind of extra care they need.

Here is a list of things that I have learned over the years. These make turnovers a breeze and saves me big money in the long run.

Please don’t buy that cheap 5 piece shower surround that you have seen at Home Depot or Lowes. I promise you it is cheap for a reason and will only cause problems. First of all caulk in a bathtub will never last. From mold to people picking at it, caulk will need touching up at least once per year.

That 5-piece surround is held together with glue and caulk and without maintenance will fall apart and just cause you more problems. Instead, go ahead with a 2-piece surround or even a tile surround. Yes, you will have to caulk in some places especially around the tub/wall but it will be very minimal to what a 5-piece surround takes. I only put 2 piece surrounds in now.

2-piece surrounds are my favorite because they are cheap and snap together higher where water is harder to get splashed in it. Plus they look so much nicer than a bunch of panels glued to the wall.

Get a good exhaust fan.

Even if your bathroom has a window I would still suggest this. Moisture in a bathroom is a killer. If you walk into a bathroom and see peeling paint on the ceiling you know that room has not been ventilated while showers were being taken.

I have all my exhaust fans wired to the same switch as the light so that it has to be turned on.

Go ahead and spend the few extra dollars for the quieter fan so that the tenant won’t notice it as much. Turning on the fan will also help eliminate bathroom odors and harmful cleaning chemicals people use in their bathrooms. 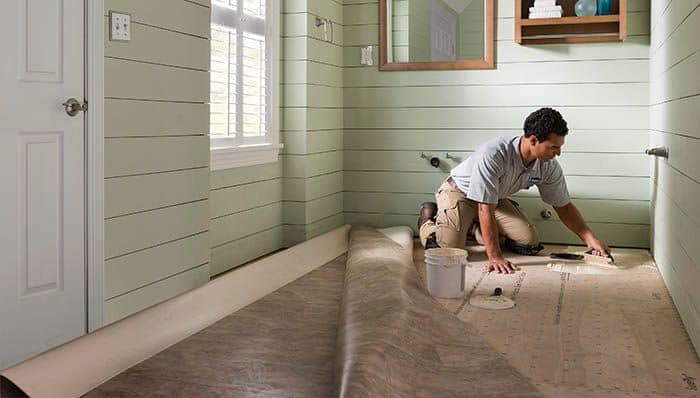 Please don’t use a snap-together laminate or carpet. Don’t be that guy or girl that thinks it’s cheap, trendy, or lazy and put that stuff in a bathroom. It is not water-resistant and it’ll just cause a headache of problems.

I go with either sheet vinyl glued down or LVT because of the waterproofing capabilities. I have used ceramic tile in the past but have steered away from this because of cost and also the grout.

Yes, the grout. I have had ceramic tile grout lines that were so soaked in urine that we couldn’t get the smell out. Although I love the look of the vinyl is my go-to in a rental bathroom.

Towel Bars in your bathroom

This has to be the number one thing in rentals that get destroyed. Do some people think this is a pull-up bar? So most towel bars come in 24 inches and as we both know most studs are sixteen inches on center.

Using that little plastic drywall insert is a joke and nobody uses it. What we have started doing is one of two things.

The first thing we like to do is cut the towel bar down to sixteen inches so that the n=mounting brackets will screw right to the studs and not just drywall.

If this is not possible we have gone and bought butterfly nuts and bolts to attach the mount that can’t be screwed to a stud. These are hose spring looking things that you collapse and push into a hold in the drywall and when you screw them tighter they pull against the back of the drywall. They are not as good as screwed to a stud but work a lot better than those plastic inserts.

These are just some of the things I like to implement on my rental properties to save me money in the long run. Some of these upgrades will cost you more than just doing it the fast cheap way but I promise you, in the end, you will get burned and will wish you did things the right way in the beginning.

About the Author Matt DeBoth

Matt DeBoth joined the US Marine Corps after high school. He served for 8 years as a Force Recon Marine in Iraq and Afghanistan. He exited the service in 2011. Right before he got out he managed to get a 20 unit apartment building under contract while deployed in Afghanistan. He started off house hacking in this apartment, and then he went into full swing.

To date, Matt owns over 160 rental units. He dedicates a lot of his free time to helping service members find their rut in the civilian world!

Check out the podcast episode with Matt!